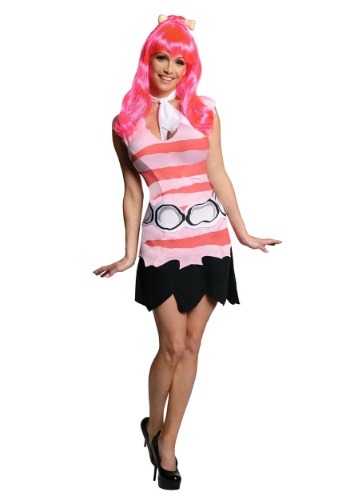 In some ways, modern technology makes our lives a little dull, don't you think? We never get the rush of sparking our own fire with our own flint to light up our own cave-house. We never get the exhilarating exercise that comes with driving (running) up and down the town on our first date, with that special someone watching with adoring eyes, just waiting for you to get heat stroke and pass out. Ah, what a bummer!

So... maybe it's not so much of a bummer, but if you've found yourself yearning for simpler times—perhaps as far back as when one-syllable sentences sufficed—then you might want to look to Pebbles Flintstone for lifestyle inspiration. Pebbles is not only the hippest young cavewoman in all of Bedrock: she's one of the most recognizable cave-people of all time. She and Bamm Bamm Rubble, her best friend, next-door neighbor, and obvious, eventual soulmate grew up running each other around town, as well as sparking fires for each other and inside each other's hearts. Eventually, Pebbles and Bamm Bamm grew up, got married, had adorable twins, and have lived cheerfully in the imagination of millions since the Stone Age! That 15,000-year-old resume really held up!

We're sure a big part of the couple's longevity is connected to their sense of style. Who wouldn't want to look at that sleeveless shirt, emblazoned with prehistoric pearls? If you're a fan, why not get a matching set of dino-mite duds like these for you and your best pal/soulmate? They may look old-fashioned, but they're compatible with all the latest technology, including motorized vehicles and electronic appliances. There won't be running Bamm Bamm around town or feeding dishes to dinos in this!