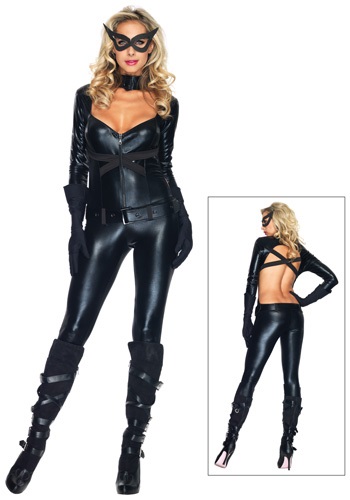 We've got a riddle for you: What's as quick and quiet as a cat, and also criminally sexy? It's you when you're sporting this sassy Black Cat Girl Costume, which will make you look like the most stunning cat burglar in town!

Big city life is tough, and sometimes you have to bend the rules a bit to make a living. For instance, if you are a little short on rent money for the month, but there are some corrupt politicians or sinister business executives that simply have too much stuff, then sneaking into their offices and taking some expensive looking goodies is just like making a bank withdrawal to a thief with cat-like reflexes. Or, if some mobsters are in the middle of a jewel heist, and you happen to slink by and run off with them while they aren't paying attention, then you're doing them a favor by showing them their plans need some more work. Nobody said being a costumed cat girl was easy, but it's all part of the job, and you sure can look sexy while you're at it!

Everyone at the party might even think you're there to plan a heist of your own when you show up in this frisky feline outfit. Or rather, they would if they weren't so distracted by the black, form-fitting jumpsuit and its open back and wide keyhole neckline. Add a pair of black heeled boots to complete this fierce look, and show everyone you're one kitty cat that's out on the prowl!