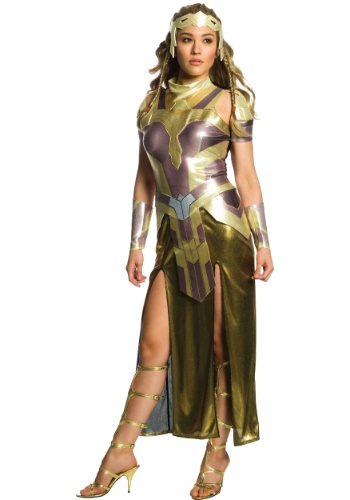 "You will train her harder than any Amazon before her. Five times harder, ten times harder, until she is better than even you. But she must never know the truth, about what she is."

Hippolyta. Queen of the Amazons, and all around awesome lady. Oh yeah, she's Princess Diana's mother too. You have heard of Wonder Woman, right?

Of course, you have, that's why you're here! No doubt you loved the smash hit Wonder Woman movie, so we think it's a really great idea to get this Hippolyta Wonder Woman costume to portray the Amazon queen. Because when you team up with a friend in a Wonder Woman costume, you're going to be a pair of formidable Amazons!

This Deluxe Queen Hippolyta Women's Costume will have you ready to recreate all of the action of the 2017 smash hit film. Train Wonder Woman to be the ultimate hero or just team up with her for a great Halloween adventure, and we're sure that your fun is going to be both epic and legendary!

This detailed costume is DC Comics officially licensed. The polyester dress evokes the apperance of her armor and dress as it appears in the movie, with touches like a shimmering finish, eagle logo, and foam belt to look like her armor. Just use the included tiara and guantlets to complete the costume, and you too will have the look of the Amazon queen!