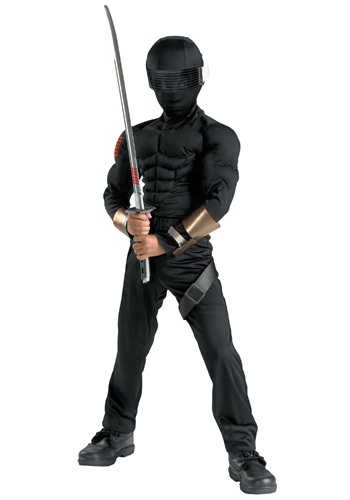 Does your little one LOVE to keep secrets? Is he mysterious and agile and brave and, well, a bit of an overachiever?

You may have just discovered that you’re actually harboring one of the most legendary members of the G.I. Joe clan: Snake Eyes! Little is known about the true identity of this highly skilled warrior--so it’s entirely possible that he’s been living under your roof this whole time. There is only one way to find out for sure: put him in this Deluxe Kids Snake Eyes Costume and let’s see what he can do! If he instantly transforms into a fierce commander, if he suddenly shows off his skills in at least dozen types of martial arts, if he starts calling the family dog, “Timber,” or if he leans over you while you’re sleeping and whispers in your ear, “Move with the wind, and you will never be heard,” then it sounds like a (kinda creepy, to be honest) reality that you are, in fact, living with the Snake Eyes himself.

Luckily, this black jumpsuit provides padding in chest and shoulders that looks just like real muscles, until he builds himself back up to form (he’s been hiding out as a civilian, after all). And thanks to the design of this Balaclava hood that covers the entire head--not to mention the face mask--your little ninja's identity can remain a secret as well. At least until he goes off to college.