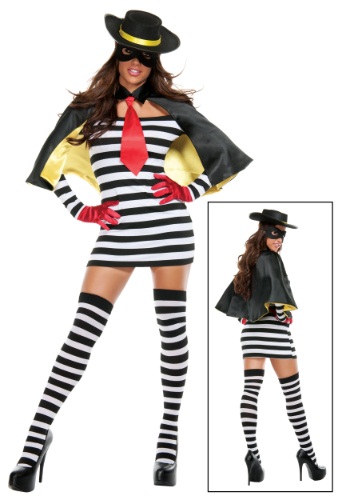 Who runs around town, dressed up in a costume, robbing people of their hamburgers? Honestly, that sounds like a strange way to spend one's free time. You know what, though? That's exactly the kind of thinking that leads to someone getting their burger stolen. No one will believe their eyes when you sneak off with their lunch in this Hamburger Thief costume; it'll be a perfect (and delicious) caper!

Slipping on a saucy striped outfit is an awesome first step toward an exciting career in burger thievery, but there's more to it if you want to be an all-star fast food outlaw. You have to decide which type of tasty burger to target. Do you fancy yourself as a bacon cheeseburger bandit, or are you more of a guacamole veggie-burger gal? Would you take an entire value meal if the opportunity presented itself? These are important questions, and you do not want to have to answer them while mid-sandwich heist. That's how mistakes get made, and then you end up in hamburger jail (which isn't nearly as wonderful as it sounds).

Actually, maybe you shouldn't go around, snagging cheeseburgers from unsuspecting folks. It may look like a glamorous life in the movies, but come on, that's pretty mean, and you could just buy one at literally any street corner for a couple bucks. And you can still feel like a bonafide burger bandito when you devour that delicious, flame-broiled (and legally obtained) prize in this striped dress and eye mask, and then make your dashing escape into the night with a tip of your hat and flourish of your cape! And the best part? No running from hamburger cops, which is great because you might want to let that burger settle for a bit before running anywhere.