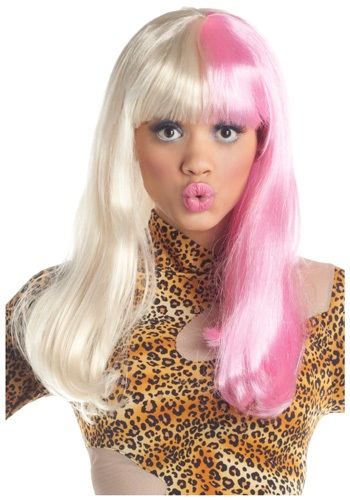 One of the cool things about being a pop star is that there’s no such thing as a dress code. As a matter of fact, the more outlandish the outfit, the better. If you want to take the stage wearing a single glove, or a gigantic hat, or a dress made entirely of meat, more power to you. There aren’t many jobs that give you that kind of freedom. Of course, you do have to contend with all those other downsides of pop stardom: the millions of dollars, the legions of adoring fans, the endless string of people whose only ambition is to keep you happy. It sounds like a tough gig, but it would almost be worth it for the chance to dress any way you wanted.

That freedom extends to your hairstyling, of course. When you’re a pop star you can rock a retro beehive, a killer mohawk, a crazy perm - the sky’s the limit. And of course, you can pull off a two-tone dye job with a perfectly level set of bangs, just like the ones on this long, flowing wig. Featuring synthetic polypropelene hair and a mesh interior, this half-pink, half-platinum-blonde number will have you looking ready to take the stage at your local stadium. And best of all, nobody’s going to tell you to change your style. That’s just the life of a pop star.