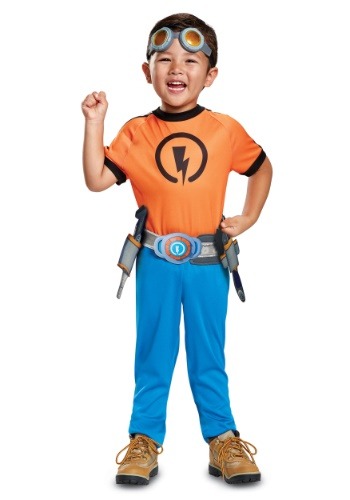 Is he ready to be a builder? We can't think of anything that's much more fun to a kid than some DIY constructions. Come to think of it, that's all we did as kids! Maybe you had a similar experience, or maybe your kid is plotting out a bold new path as a crafter. Well, now he or she can be just like their hero Rusty in this Rusty Rivets Costume!

Halloween's always a ton of fun, so maybe the thing that will make it a little better is having a handy hero around to craft some zany creations out of spare parts. Maybe he or she will even build a contraption to help them maximize their trick-or-treat candy count! Now that sounds like a very fun Halloween, indeed!

This Rusty Rivets Rusty Costume is an officially licensed costume based of off the hit Nick Jr. show of the same name. The polyester printed jumpsuit looks just like the gear the character wears on the show, an orange t-shirt and blue jeans! It has his logo on the chest, and it comes with a printed utility belt to hold some toys (sold separately). Just finish off the look with the included goggles, and your kid will be ready to craft some cool stuff!

Nick Jr. to your TV

We're all about bringing the animated action to life here at HalloweenCostumes.com, because, for us, that's what Halloween is all about! Of course, we grew up going as our own favorite characters for Halloween, and we're sure you did the same. Well, now we've got a new generation of heroes on television, and Rusty Rivets is one of the coolest. So let's get your kiddo into this costume, and get them building!

Size Chart
3T/4T4/6
Inches
Centimeters
Costume Sizing Tips
Questions & Answers
There are no questions for this item yet. Be the first to ask a question!
Ask a Question