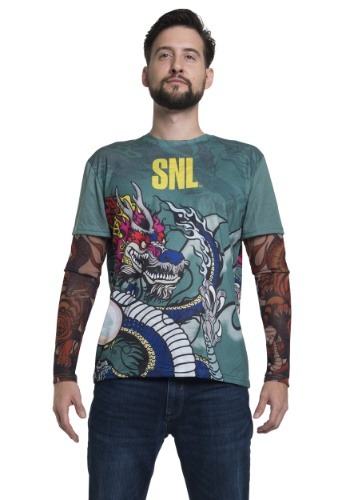 Recently, Stefon left Rockefeller Plaza for the FUN headquarters to grace all of us with his presence. Boy, what a treat it was to sit down and chit-chat with the iconic party guy! He spilled the tea on all the upcoming bars and nightclubs opening up in New York City and urged us to check out the trendy spots next time we visit. Stefon recommends the club Crease, because of its unique ambiance. Screaming babies wearing Mozart wigs and talking Furby toys decorate the exclusive nightspot — it sounds lit! ("Lit" is a cool millennial word Stefon taught us. Jeez, he's awesome.)

Stefon not only gave us the lowdown on NYC clubs to hit up, but he also gave us the 4-1-1, spilling the insider secrets on which costumes will dominate the Halloween scene this year. Since the club-kid is undeniably in-the-know, it came as no surprise that Stefon's everyday clothes have become prime costume attire. SNL's popular character is the trendiest and most fashionable costume to sport especially if you plan on attending a nightclub's costume-event. Lucky for us, Stefon personally hooked us up with his officially licensed costume tee and we're ready to supply you with the same attire. Bring the party monster's city-style to your hometown Halloween festivities to spice things up. Mimic Stefon's outlandish personality and when it's closing time, you'll have a bunch of followers trailing behind you.

The SNL tattoo long sleeve Stefon costume tee consists of a soft tee with attached mesh long sleeves. The sleeve looks similar to a classic Ed Hardy tee with a fierce and colorful dragon printed on the front and back as well as the character's name, "Stefon," written in yellow cursive. The nude-colored mesh sleeves feature the same tattoo-print, showcasing vivid images of tigers and snakes.

Accent this undeniably fly look with a wig that is styled into an asymmetrical cut and wear man-jewelry, like silver rings and a matching chain to look like the Weekend Update star.

Size Chart
SMLXLXXL
Inches
Centimeters
Questions & Answers
There are no questions for this item yet. Be the first to ask a question!
Ask a Question