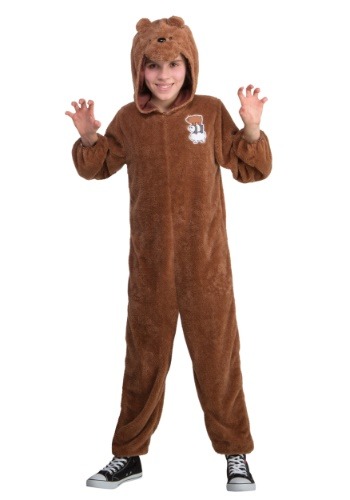 You can't stop a great leader from leading! Just try telling Abraham Lincoln not to write the Gettysburg Address. Try telling Alexander the Great not to unite a bunch of the Western and Eastern world through his military genius! Try telling Bill Gates not to invent crazy new gadgets and technology for the world to marvel over! And you just try telling Grizz not to lead his brothers, Panda and Ice Bear, to greatness! Yes, Grizz takes his claim to fame by leading the trio of talking bears from We Bare Bears. His cheery nature is a nice counterbalance to Panda's constant feeling of anxiety and Ice Bear's odd stoicism.

Do you think that your child has what it takes to step into the role of lead bear? Well, then perhaps it's time that he dressed up like character by wearing this officially licensed costume from the hit Cartoon Network series.

Your child will be ready to lead his brothers when he wears this We Bare Bears Grizz costume for kids! It comes with a  comfy jumpsuit that is made out of a light brown faux fur material. It has a "Bear Stack" emblem embroidered onto the front, which Grizz, Panda Bear, and Ice Bear on it. Of course, the most important part of this costume has to be the hood, which is shaped like Grizz's face! The top has a plush nose with little black eyes top. The very top of the hood even has round ears attached to it.

Any young fan will have a great time wearing this We Bare bears Grizz costume! To make the experience even better, you can dress your young one's brothers or friends up in our Panda Bear and Ice Bear costume to unit the trio. We even have adult versions of the costume, so you could head out for a night of bear fun when you dress up like the characters from the show.

Size Chart
8/1012/1414/16
Inches
Centimeters
Costume Sizing Tips
Questions & Answers
There are no questions for this item yet. Be the first to ask a question!
Ask a Question