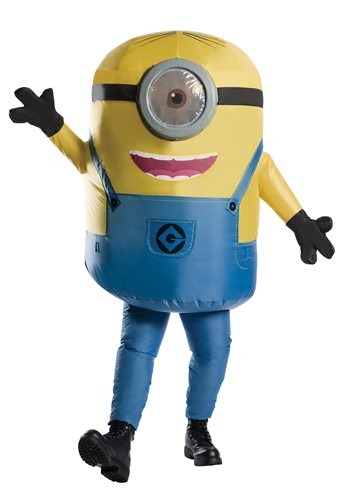 Being a henchman might not be the most glamorous job, but someone has to do it! Without the Minions, the world would lose out on so much. Who will help Gru build his crazy machines? Who will entertain Margo, Edith and Agnes? Who will foil Scarlet Overkill's attempts at world domination? We need more Minions on this Earth, and... actually, have you ever considered becoming a Minion?

That's right! You could be a Minion. Sure, you're a little bit bigger than a normal Minion and you're a lot less...yellow, but that shouldn't stop you from trying to enter the world of minioning. If you have a love of bananas, a desire to build weird gadgets or a tendency to speak in weird babble words, then you might have what it takes to serve the world as one of the Minions. All you need, is the right look. This inflatable Minion Stuart costume may be just the thing you need to get your new career started.

Based on his many appearances in Despicable Me and Minions, this licensed costume artfully uses a tiny fan to keep this suit inflated into the funny little Minion shape. A single eye protrudes from the front and a set of overalls decorates the front. Once you cozy yourself up inside of it, the only thing missing for your transformation into a Minion will be a healthy hankering for some bananas! Actually, come to think of it... we happen to have plenty of bananas to make for a great couples costume.