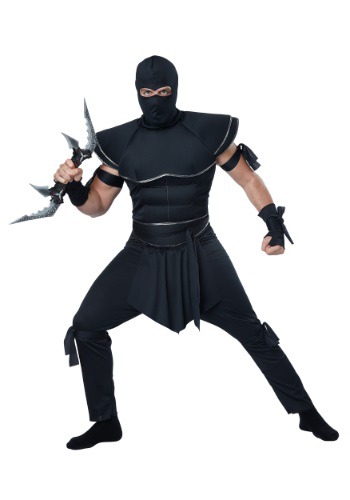 So, you’ve watched all the greatest Kung-Fu flicks that are out there? Wow, that is super impressive. What’s that? You say you even have an expansive collection of real and replica ninja weaponry? That is awesome! We’d say you’re just one step away from being a full-fledged ninja, and that step just happens to be something we can help you with.

Check out this Ninja Warrior Costume for Adults, it’s the ultimate outfit to accomplish some major espionage. Once you slip into this costume, you’ll feel the essence of ninja warriors that came before you and become filled with their knowledge and strength, so yeah, that’s pretty cool. Don’t be surprised if you get the sudden urge to showboat a bit with a backflip or two. However, this is an urge you must fight. You just never know who's watching and the last thing you want to do is blow a mission by revealing that you're a ninja. Also, they have that whole code of honor thing too, so the ninja probably wouldn’t condone one of their own being a showoff.

Now you can finally put all that knowledge you’ve gained from years of watching Kung-Fu movies to use for good, for evil, for self-gain… really for whatever you want. You’re going to be a ninja, literally one of the most feared and respected type of mercenary in all of history. So this costume will basically make you unstoppable, have fun!