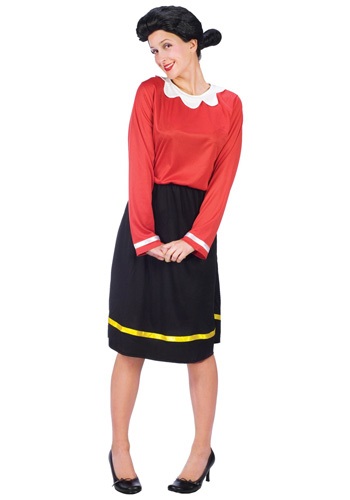 Not every gal has a big strong sailor man to save her from danger, but the lovely Olive Oyl doesn't have to worry about that. She just has to wave her arms in the air and shout "Help, Popeye!" and her beau comes to the rescue! When you're wearing this swell Olive Oyl Costume, you'll look just as dandy as she does in the cartoons!

Olive may be best known as Popeye's sweetheart, but did you also know she comes from a proud family of Oyls? While Olive Oyl has made a real splash in the Italian cooking world, her brother Castor Oyl has been involved in so many types of products, sometimes it's hard to tell what doesn't have a little Castor Oyl in it. Her father Cole Oyl is a big deal in the mining industry, and you must have heard of her famous explorer uncle, the great Lubry Kent Oyl, who's always been a slippery character. But despite the her distinguished, oil-pun based family, Olive has always been happiest as Popeye's true love, and she knows no matter how much trouble she finds herself in, safety is just a can of spinach away!

You won't have to worry about rescue, either, when you're wearing this cutesy costume to your party, since a big tough sailor man is bound to swoop in and save the day! And since this outfit is the total package and includes a one piece dress and stylish wig, you won't even have to worry about if everything matches or not. But if you already have a sweetheart of your own, dress them up as Popeye for a classic couple's costume!

Size Chart
XSS/MM/LXL
Inches
Centimeters
Costume Sizing Tips
Questions & Answers
There are no questions for this item yet. Be the first to ask a question!
Ask a Question