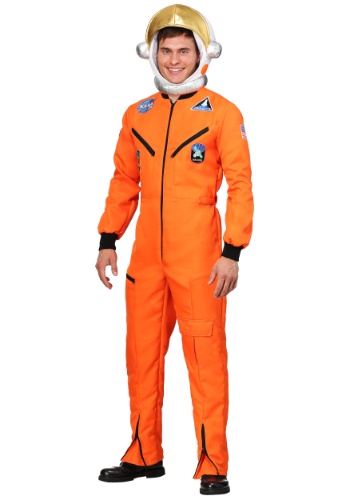 So, you might ask, how does one get invited to this epic extraterrestrial shindig? Well, first, you've got to be an Astronaut. We can't help you get enrolled in NASA training but there might be just a little something we can do to get you closer to going to the moon. We can help you look like an astronaut! Costumes are our forte, and we know just a thing or two about creating official looks that can pass for the real thing. And when we heard about the party on the moon? Well, we had to design this Orange Astronaut Costume!

Yep, we made and designed this Plus Size Astronaut Costume right here in our own costume studios. And it has the details that matter! It has realistic space patches, including a NASA patch appliqued to the jumpsuit. With zipper details, faux and functional pockets, and rib knit collar and cuffs, it has a functional design that looks like it's really NASA approved! Team up with a friend or date in one of our exclusive men and women's astronaut costumes for a great couples costume or group theme. You might not get to party on the dark side of the moon, but we're sure when you go in one of our costumes, the party is still going to be out of this world!