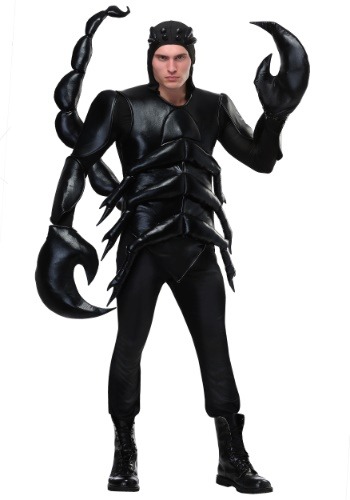 IF YOU'RE IN A PINCH

We applaud your allegiance to scary costumes. Every Halloween you pick a more frightening and impressive costume than the year before. The 'killer clown' costume you once wore is legendary and we still can't look at the pictures without having nightmares. With zombie, vampire, and various masked murderer costumes under your belt, it's easy to conclude you've successfully transformed into every horrifying entity under the sun, but there's still one dangerous killer you've yet to embody...the scorpion.

The venomous dessert brute's all-black appearance is appropriate (and eerily foreboding) since scorpions are basically the grim reaper of the arachnid family. The ominous creepy-crawler takes more lives than any poisonous snake slithering about so if you aren't trembling when standing toe-to-toe with this monster, you're basically superhuman. When dressed in the adult scorpion costume, you'll leave a stinging mental impression capable of inducing nightmares, your typical  M.O.

Creep out from any dark and dreary dwelling wearing this exclusive scorpion costume, expertly crafted by our design team. The long sleeve pullover acts as the first layer of the 3-piece costume. The stuffed exoskeleton serves as plush armor, providing all the necessary scorpion appendages like the many legs and the aggressive stinger tail. The included pincher mitts are also plush and feature interior elastic to fasten around both wrists. Complete the arachnid-themed ensemble with a smoldering look that says, come hither if you dare.

ALL HAIL THE SCORPION KING!

Crawling away with the coveted costume contest prize will be a cakewalk as long as you're also sporting the necessary apparel not included with this scorpion costume. The look requires black pants (who doesn't have a pair of those lying around?) and black shoes of any kind. Pro tip: skulk around in the darkness making a hissing sound to make hearts race!