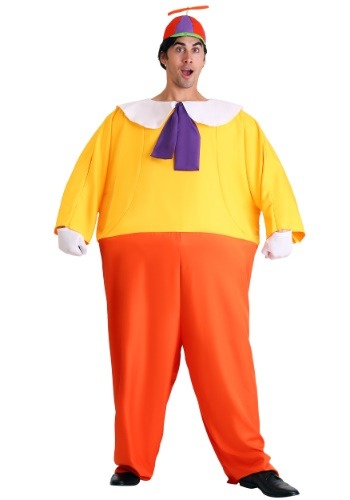 Back in the early 18th century, a spat arose between two Baroque composers, George Frideric Handel and Giovanni Bononcini. It became such a matter of public discussion and concern that John Byrom wrote a poem about the nonsense of having a dispute between two people who were so similar, and Tweedle-Dee and Tweedle-Dum were born. Since then, it has been used to in reference to famous psychologists, used by Bob Dylan to start out his record, used by Ralph Nader to describe George W Bush and Al Gore, and of course, most famously used by Lewis Carroll as the famous residents of Wonderland.

Today, you're probably not making a satirical political statement or critiquing classical composers if you wear Tweedle Dee and Tweedle Dum costumes for Halloween. Chances are you're just having an Alice in Wonderland party instead. And that's ok with us, because to be honest, we'd rather not get into the hot button issues of baroque music and psychologist methods. We just love the silliness of these two characters, and how much more nonsense they add to the Wonderland story. You can add your own stamp of nonsense with this Adult Tweedle Dum Tweedle Dee costume.

This costume is a yellow and orange jumpsuit which is round and has a white bib. There is a plastic hoop inside that fits within the waist for support, as well as to round out the costume. (no pun intended) Now you're ready for Wonderland, assuming you can find a white rabbit too!