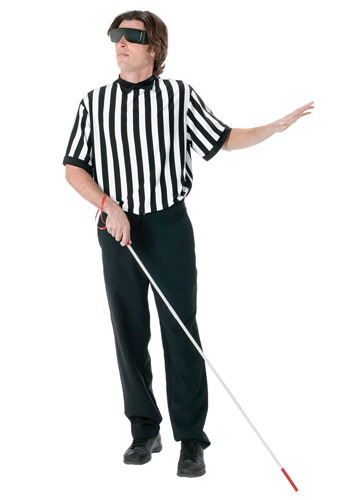 Even if Halloween isn't the day before, on, or after the big game this year, we have a good, strong hunch telling us that your buddies might get a kick out of this clever Blind Referee Costume. You'll be fumbling at the water cooler with cups and the like, missing actual fumbles, while your pals sneer, I think the ref turned a blind eye on that play...oh wait, he's really blind!

Just think of the possibilities! Say the Giants are playing the Cowboys and the playoffs aren't necessarily on the line, but they're just over the horizon, on everyone's mind. Say it's tied until the last second, when your boy Odell Beckham Jr. gets up in the air and snags it. All he needed to get two feet down on the turf was a split second and Earth's natural gravitational pull, but he gets shoved out by Brandon Carr with no time left! The ref calls the game and you are livid, up out of your seat, yelling, screaming, with nothing constructive to do but maybe write a strongly worded letter to the commissioner and more strongly worded texts to your friends.

Or, if you're down to explore some creative venting methods, you could slap a Cowboys logo on the back of these black and white stripes, don the black sunglasses, and rap the tapping stick on all their desks in the morning. You won't even have to say a word. They'll get it. They'll laugh, you'll laugh, and for a single moment you all will forget that your boys in blue lost the game. Just thank us later, dude.