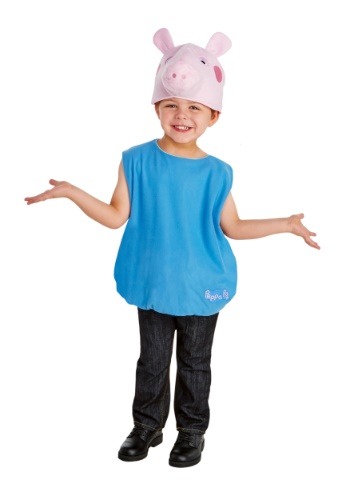 Anyone who has ever had a brother or sister knows that being a sibling, though fun, often has its challenges. When your little brother only wants to play dinosaurs and doesn't even seem to care about pretty flowers, you have to wonder how you two are so different. When you are in the bathroom, listening to music and he's outside the door, knocking in panic, he might wonder how you got to be the way you are. In the end, though, you can always make each other laugh, or in the case of the Pig family, snort.

Peppa Pig's little brother, George, often irks her in new and unique ways but they always end up laughing over their differences. While George knows everything about dinosaurs, Peppa can't get enough of her paint set. When your children dress as the Pig family they will have so much fun pretending to be their favorite cartoon characters and making snorting noises that they just might put aside their differences and embrace their piggy nature. Who knows, maybe Peppa will even teach George to share his T-Rex doll!

Whether you're having a Peppa Pig birthday bash or dressing up for Halloween this adorable costume is easy to put on. Just slip the George smock over your little piglet's head and pop on his cap. Just like that. Now all you have to do it dress up Peppa, Mummy, and Daddy and your lovely pig family will have a ball!

Size Chart
2T3T/4T
Inches
Centimeters
Costume Sizing Tips
Questions & Answers
There are no questions for this item yet. Be the first to ask a question!
Ask a Question