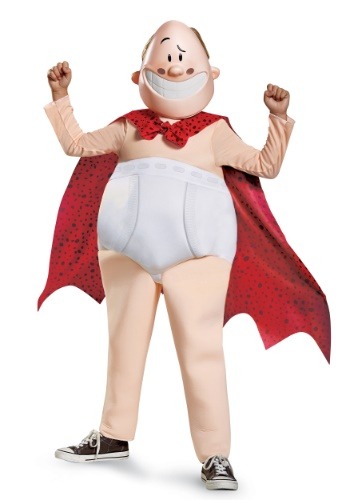 The Hero We Need

Most of the time superheroes in comic books and TV shows are gifted with miraculous powers, giving them the strength to pulverize enemies and squash foes. Other times, these heroes are wealthy enough so they can equip themselves with high-tech gadgets to elevate them to certified superhero status. However, one-of-a-kind superheroes like Captain Underpants don't need gimmicks or gizmos; just pass him the clean laundry so he can gear up and save the world; or at least the students of Jerome Horwitz Elementary.

Sure, any well-read Captain Underpants fan could argue that the undergarment-wearing crusader did gain superpowers in the third book by drinking "Extra Strength Super Power Juice," but even if he chose not to imbibe the mysterious liquid, he would still be an epic character. Not everyone has the confidence to strut around in a pair of unforgiving tighty-whities so we think his carefree nature is a superpower in itself! We'd like to see if those other high-maintenance superheroes (you know who we're referencing) can just throw on a pair of undies, tie a cape around their neck, and then defeat bad guys like Sir Stinks-A-Lot. Um, we don't think so!

If Captain Underpants is the easy-going superhero that makes your little bookworms perk up, then they'll love wearing this deluxe kid’s costume. Offering more coverage then a measly pair of undies, this soft nude jumpsuit makes costumers appear like they are just wearing underwear and a cape. A character mask completes the cartoonish look. Now, your young intellectual can grab the house plunger, storm the streets, and show off this Captain Underpants costume to the neighborhood!

You've finally become the person you were always meant to be... Captain Underpants! This Captain Underpants costume will transform your little dude from ordinary to extraordinary (and also in heroic underpants).