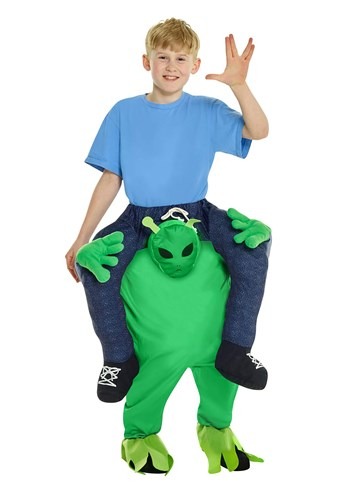 It's a matter of 'when' they arrive and not 'if' because make no mistake, the aliens are coming. Their descent to Earth will be on their terms— we highly doubt they'll send us a save the date invitation, even though that would be nice. Although there's no telling when the little green men will touch down, what they'll look like, or the awesome powers they'll possess, there's still a way for you to prepare for an imminent alien invasion and no, it doesn't involve constructing galactic weapons or experimentation of any kind. (What a relief!)

The alien piggyback costume familiarizes youngsters with what it's like to be hauled away by extraterrestrials and trust us, it's a lot more fun than it sounds. One day when a spaceship finally touches down, you'll already know what it feels like to have alien arms firmly wrapped around you thanks to this innovative costume design. The aliens will appreciate your preparation for their invasion so you'll be made a king on their planet and not a science experiment. That's what we're hoping for anyway...

This costume mixes Martians with humans to create an otherworldly optical illusion. Step inside the zip-up suit and stick head and hands through the appropriate holes and you're good to go! The illusion makes it look like an alien is carrying you, but it's really just your legs doing all the walking. Now just take a couple steps to trick others into thinking the alien invasion is underway.

THE MOTHERSHIP HAS LANDED

This is a complete costume but you could always wear a space helmet if you want to keep your identity a secret— an idea the aliens will surely love. If you enjoyed the alien piggyback costume then check out the unicorn and T-Rex inflatable piggyback costumes too.