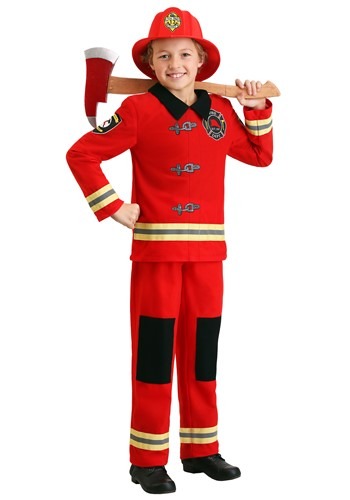 There isn't much need for the knight in shining armor racing on horseback towards the dangerous beast that has been threatening the village. Neither is there a particular demand for flying, invulnerable, alien superheroes poised ready to conquer the latest mutant mega-villain—though we wouldn't mind a few on speed dial for if the latter shows up!

But, that doesn't mean that the world doesn't need heroes! And, we can tell by the way everyone talks that your kiddo has just the stuff to be a world-changer for a few folks in need. The real question is what role your tyke wants to play in this brave new world of would-be heroics. There are plenty of options, of course, but we feel that something flashy is right up his alley. We're happy to offer a ladder to get your little one ready to go. But, perhaps it might be a little early for all that. Maybe a trial run with a costume will hit the spot!

Help your little heroes begin their journey to firefighter fame with this Friendly Firefighter costume for kids. This vivid look was crafted by our own imaginative team of dream designers and will have your tyke looking the part by the time the sirens go off. The jacket and pants are bright red with orange and black stripes that are real attention-getters. The coat has official-looking patches to ensure your kiddo has full access to the station. Don't forget the firefighter hat with the badge!

A HERO IN THE MAKING

Now, we admit that you might have to deal with your kiddo making a few extra siren noises or becoming especially obsessed with fire safety. But, aren't those things worth the bright future that awaits you and yours with this firefighter look? (Okay, maybe it takes more than just a costume, but you'll have a ton of fun along the way!)