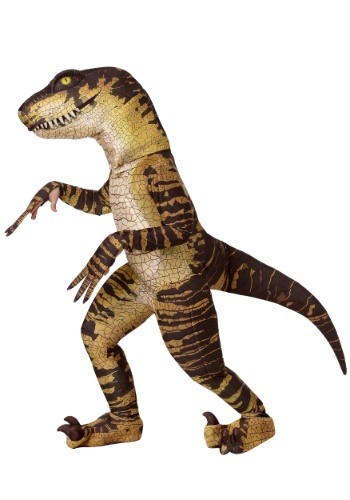 Jump into the jungle

Ah, the mighty Jurassic jungle. Despite being thousands and thousands of years ago, we're getting an ever better picture of what life was like on earth back then. Dinos, and lots of them, ruled the day. And when it came to those jungles? There was a particularly fierce predator who ruled the roost.

That's right, the velociraptor was a pretty ferocious little dinosaur, and while they weren't quite as big as they've been depicted in pop culture, they did have those sharp claws right on their feet. We're sure you wouldn't want to come face-to-face with one while you're out on a hike!

A much more awesome scenario is dressing up like a dinosaur. And we've got a great choice right here, with this Child Raptor Costume. It's styled like Velociraptors you've seen in the movies, and this costume makes for a fearsome mockup! All we need is a kid who's feeling particularly fearsome. Think you've got someone in mind?

A highly detailed design, it was made right here at HalloweenCostumes.com, because we thought dinosaur costumes needed an upgrade. And this costume delivers! Sized just right for kiddos, this costume features a fully printed jumpsuit with muscle padding and an oversized tail. The bold pattern really stands out when compared to a typical dino costume, because our graphic designers created a unique, one-of-a-kind pattern! With a detailed headpiece, as well as hand and foot covers included, it has everything your child needs to become a fierce predator. Do you think they're ready for the Jurassic jungle?

Everything needed for a roar

Our brand new line of Made by Us dinosaur costume includes all of the favorites, from the Triceratops all the way to the skies with the mighty Pterodactyl. And with sizes for kids, toddlers, and adults, we've got the costume to outfit your whole family. Choose a dinosaur theme for your gang this Halloween, and we're sure it's going to be a mighty roar!