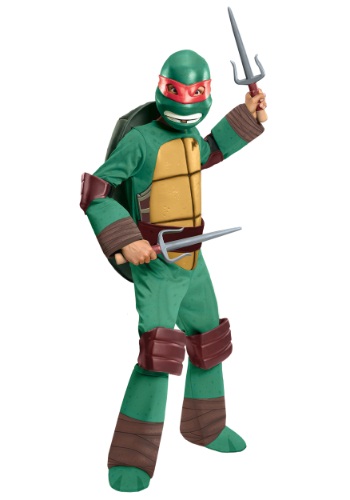 At long last, an educational costume! Enough of these superhero costumes, about guys with magic powers who can do ninja stuff, or about mutated turtle people. Finally, the costume kids need: Raphael Sanzio da Urbino! Or as you know him, Raphael. Obviously, this world-famous Italian painter needs no introduction. He painted a well-known fresco, The School of Athens. Beginning in 1509, Raphael- Hang on, why is this costume green? Raphael wasn't green. This costume looks like a turtle- Oh man! It is a turtle! Of the Teenaged Mutant Ninja Turtles, to be more specific. Well, there goes four years of Art History for us.

When we step back and think about it, we suppose it's not surprising that there isn't a costume for a centuries-old man who painted stuff. A mutated teenage turtle with ninja training is obviously much more appealing to the child demographic. And why not? Raphael is rumored to be "cool, but rude", just like many children! And he uses sharp sais to kick Shredder's butt along with all of the foot clan. Now that we think of it, when did art ever defend New York City from attack by an evil underground army? Ever? We'll have to look into this. And is there anything more American than enjoying pizza? No. And there's no record that Raphael the artist ever ate pizza. On the other hand, there's plenty of evidence that Raphael the turtle loves pizza! So who's a better role model, parents? The stuffy old man spending all his time in front of a canvas, or a spunky, funky mutant ninja turtle defending our cities and enjoying some pizza with his brothers? We think the evidence speaks for itself. Cowabunga, turtles!