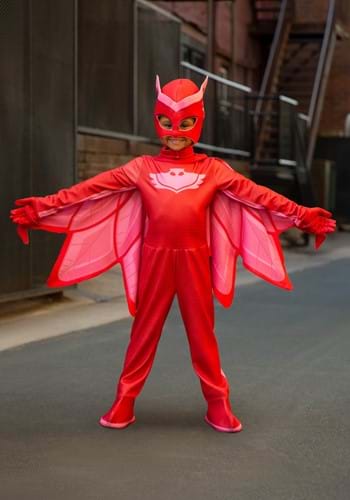 Does your little one like to stay up all night, even after bedtime? She might be part of a crimefighting superhero team by night, like the PJ Masks! She'll stop the bad guys in their tracks in this Deluxe Owlette Costume, from Disney's PJ Masks!

You never know who might be a costumed superhero these days. If your little girl seems like she's been up all night some mornings when she comes downstairs for breakfast, maybe she actually was. After all, as the PJ Masks say, "Bedtime is the right time, to fight crime and..." Oops, we forgot how the rest of that goes. As we were saying, though, she might be spending all night flying around the city like Owlette and her teammates, Catboy and Gekko. Supervillains, like the sinister Romeo, think bedtime is also the best time to test out their latest evil inventions. Hey, someone's got to stay up late to stop them!

We gotta admit, as much as we love to sleep, fighting crime in the comfort of your own superpowered PJs sounds like a ton of fun, too! Your little PJ Masks fan will have a blast pretending to swoop around on her own Super Owl Wings in this costume. They won't be able to actually fly, of course, but the feathery cape looks really cool when it flaps. Get the rest of the PJ Masks together for some super-cool superhero group costume fun, but hopefully they don't stay up too late!

Size Chart
2T3T/4T4/6
Inches
Centimeters
Costume Sizing Tips
Questions & Answers
There are no questions for this item yet. Be the first to ask a question!
Ask a Question