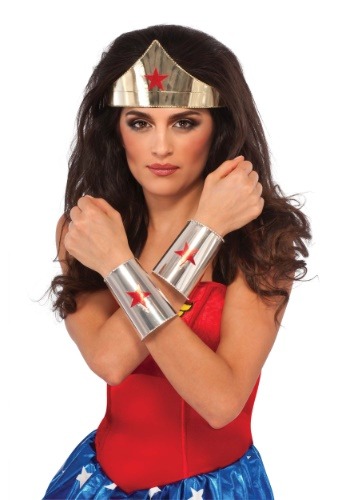 What does Wonder Woman do when she suits up to save the world? Well, first, and obviously, she puts her clothes on. And we're not talking about any old threads here. We're talking about the Amazing Amazon, after all, and she's got superheroic uniforms to match her most excellent superhero skills! She's got old-school leotards, dress costumes, full bodysuits, and even a slick armor costume from the brand new movie. Now those are some fashion choices!

No matter which style she chooses for the day, there's always an important addition that follows. Sure, it's accessorizing, but it's also serious battle gear, too. We are talking, of course, about her tiara and bracelets! Yeah, they're gold, and adorned with star accents so they look absolutely great, but they come in pretty useful, too! The Bracelets of Submission, as they are known, are indestructible. They can deflect bullets and energy blasts, and can even brace her on a long fall! While the tiara is mostly ornamental to show that she's a princess of Paradise Island, it's no slouch in a fight either, as she can use it as a throwing weapon in a pinch.

So, it goes without saying, if you're planning on suiting up as Princess Diana of Themyscira, you're going to need this Deluxe Wonder Woman accessory kit to complete your costume. No matter which style you choose, this tiara and bracelet set will add a signature style to your costume. Officially licensed, and constructed with real metal, these shiny acessories are sure to be just the thing that will let you save the day!