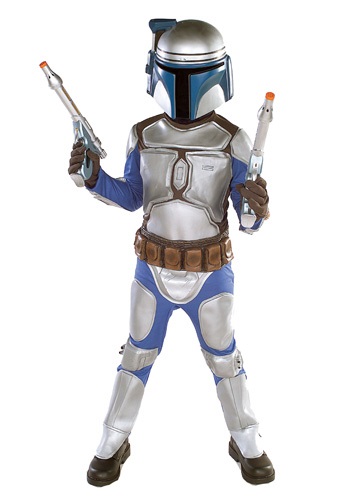 Before the infamous mercenary Boba Fett was blasting and hunting bounties across the galaxy (and getting job offers from Darth Vader, himself), he was a kid learning the trade. And who was teaching him these deadly skills? None other than his jet pack wearing, laser pistol twirling dad, Jango Fett! If your little Star Wars fan wants to dress up like the most dangerous bounty hunter in the galaxy, this Jango Fett Deluxe Costume is just what they'll need to capture some scum and villainy!

Technically, since Boba is a clone of Jango, them being father and son is up for debate, but we wouldn't argue with either of them about anything... What's more important is that Jango loved Boba like a son, and trained him to be just as tough and skilled as he was. It probably made tracking bounties from one star system to another easier if they could travel together, and Boba even helped out. But Jango's reputation for being a crafty and skilled fighter was around long before his little clone buddy came along. The Republic even made a whole army using clones of him, which must be a pretty big compliment for a warrior!

Your kid is going to look and feel just like the legendary Mandalorian mercenary in this awesome deluxe costume. It's an officially licensed Star Wars outfit, so it's modeled after the real costume from the famous movies. For even more realism, add a matching Jango Fett Jetpack, or a pair of toy blasters to help them capture their quarry. Bad guys everywhere, from the Core Worlds to the Outer Rim, will be on the run when they hear your little one is suited up and hot on their trail!