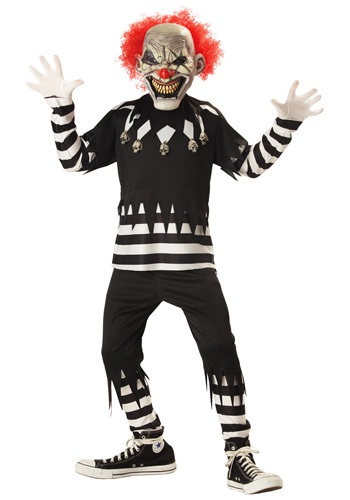 Is your little one afraid of clowns? If they answered “No” then they are way more brave than we were at their age! That, or they aren't scared of clowns because they know the secret to making clowns scared of them. They just need to dress up in this creepy Psycho Clown Costume, and pesky clowns won't be a problem any longer!

So many people are terrified of clowns, that there's even a name for it (it's called Coulrophobia, and if you're not sure if your kid has it or not, we don't recommend hiring a clown for their birthday party, or you might find out really fast) and there have been scientific studies to try to figure out why. But has anyone ever looked into what give clowns themselves the heebie jeebies? Do silly clowns, that just look like they want to help everyone have a good time, get spooked out by other clowns too? We aren't licensed clown-researchers, but we'd bet that a menacing, sinister-looking jester would have all of the other clowns shaking in their giant red shoes. It's the perfect look for your little spooky prankster (or “spookster,” which we just made up) to wear if they want to creep out some average clowns!

Your kid may want to be careful who they wear this costume around, because it is seriously scary! But if everyone is in on the chilling fun, then this spine-tingling latex mask and creepy clown outfit will bring lots of gasps and laughs to their friends. They can even add a pair of our giant clown shoes for an even more hauntingly hilarious look, and they'll be every clown's worst nightmare!