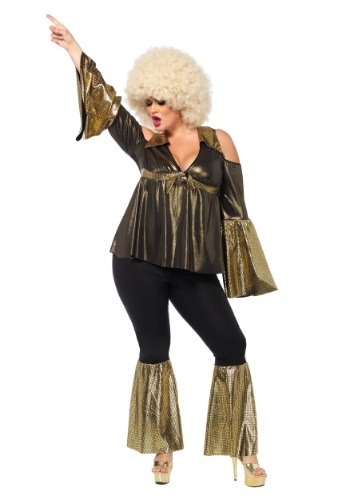 Someone once said that disco is dead. Or at least we've heard people always say that they say disco is dead. Whoever "they" is, right? Well if disco really is dead, they better get ready because you're bringing it back from the grave! They can take their negativity and leave the dance floor, or be swept up in the magic that is disco!

But you know what? Disco isn't dead. Disco never even died! Don't believe us? Ask ABBA. Ask Barry Gibb (for all the young folks out there, he was in the Bee Gees. If you don't know who the Bee Gees are, we can't help you)! In fact, just point your finger at your hip and then back up toward the sky. You call that dead? That's disco, pumpkin! So it's time to light up the dance floor, turn up the music, break out the bell bottoms, warm up your vocal chords (this is a pretty long to do list. Are you sure you don't want to get a pen and paper or something?), put on your make up and your high heels, fro up that hair and dance!

In this two-piece metallic outfit, you're no longer the normal woman your friends and family know. When you're rocking the bell cuff sleeves you're not that mild-mannered lady your coworkers know. You're more than that, so much more, when you step out on the dance floor. You know what you are. You're a diva! You're a dancing queen! And now it's time to get on out there looking like a gift from heaven as you teach all the kids out there what disco is really all about!

Size Chart
1X/2X3X/4X
Inches
Centimeters
Costume Sizing Tips
Questions & Answers
There are no questions for this item yet. Be the first to ask a question!
Ask a Question