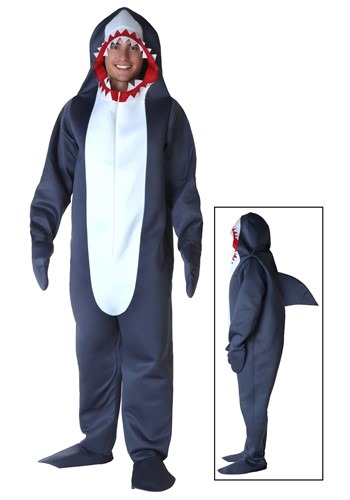 Shark Week originally aired in July 1988. 1988! That was forever ago. So long, yet still it aired 13 years after Jaws came out. Still a whole year after the fourth Jaws was a thing. (The Revenge, for those of you keeping track.) How is that even possible!? We love Shark Week, obviously, and we're sure you do, too... but there are always ways to make it better.

You plan the biggest shark inspired bash that any of your friends have ever seen. You pull out all the stops. You've got all the snacks. You've got the chips, dips, soda, and beer. Maybe you even go a little crazy and stick the chips in the salsa like shark fins breaching the surface after a hunt. Then there are the really spectacular things. The large inflatable shark that you have hanging above the heads of your guests. The fishing boat-shaped sofa. Naturally. But, this year you need to go all out. You need something a little extra.

It is time to become the very thing you celebrate. You want to become a shark! Well, we aren’t actually fairy godparents, but we can help you become one of those great fish. This Plus Size Shark Costume will help you throw the best Shark Week party you’ve ever thrown. Heck, this one is gonna beat the party of '88 when the TV program first aired. Your guests will be talking about the number of teeth that a swimmer barely escaped (and how rare it is to actually be attacked by a shark) all while you serve them chips and beer dressed as a practically prehistoric predator!

Who wants to limit Shark Week to just a summer event. It's time to let that swimming machine out whenever you like and that's exactly what you get to do with this costume.