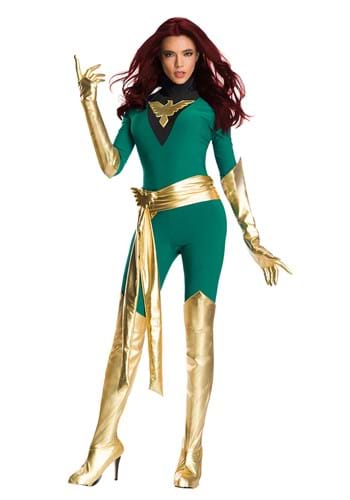 You know how it goes. You’re just minding your own business, saving some people with your telekinetic mutant powers. Then, out of nowhere, you find out that you’re the host for the Phoenix Force, one of the most powerful entities in the entire universe. Alright, so maybe that doesn’t happen to you on your average day here on Earth. But that’s because Jean Grey is kind of a big deal.

She was the undeniable powerhouse of the X-Men for many years and she’s single-handedly defeated a bevy of different supervillains. It’s really no wonder that the Phoenix Force chose her as the successor to its power. Do you think you’re ready to wield the Phoenix Force? Are you a big deal, just like Jean Grey? Well, then it’s time for you to slip into this officially licensed X-Men costume to prove it!

This Jean Grey Phoenix costume faithfully recreates her look from the Marvel comics. It comes with the green, form-fitting bodysuit, which has a gold Phoenix emblem on the front. It also comes with a pair of shimmering gold boot tops that you can wear over your favorite pair of heels. The matching gold gloves give your hands a heroic look and the matching gold waist sash cinches the look, making you feel like a fierce comic book superhero.

Get your telekinetic powers warmed up (if you have them)! This officially licensed Jean Grey costume will have you ready to save the world solo, or with a team of your friends. If you’re trying to gather up your own group of superheroes, try checking out our full selection of X-Men costumes to bring together a team. You’ll be ready to take down any villainous threat that crosses your path!