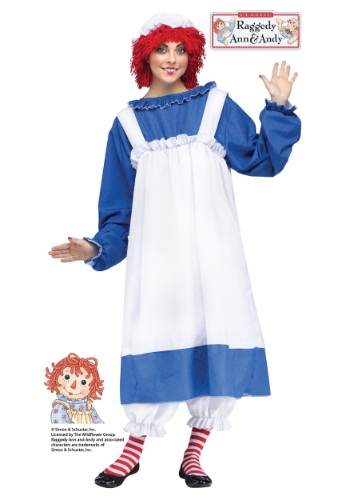 The popularity of some characters at Halloween seems to have outlived their actual pop culture shelf-life. I mean, no offense to the lovely gal, but we at HalloweenCostumes.com couldn’t tell you what Raggedy Ann and Andy actually do. Batman fights crime, Nancy Drew solves crimes, and Scrooge McDuck swims through coins (ouch). Most children’s characters have designated activities. But here Raggedy Ann and Andy are every year alongside whatever’s new, asserting their place as part of the same pop culture landscape. Why should they worry about rebooting the Raggedy franchise when their popularity never ebbs? No one has seen any new Raggedy material in decades, but there they are, jockeying with each year’s superhero blockbuster and political villains for most popular costume at the Halloween party.

And who doesn’t want to look like a disheveled doll character created in 1915? As the star of her own book series with bright red yarn hair, red triangle nose and shapeless frock, Raggedy Ann is sure to be a beacon for nostalgic members of the G.I. generation, and precocious young children alike.

Having a bad hair day? Feeling on the chubby side? The fetching red wig covers any locks, and the forgiving dress hides any figure flaw. And who doesn’t want to look raggedy? Children with a fondness for everything old-fashioned will flock to you. Dress your intended up as Raggedy Andy. Wait, he’s her brother? Well, to each their own.