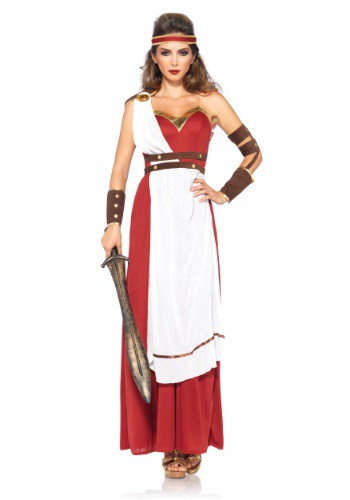 The Spartans were the bad-asses of Greece.

Seriously. They were known for their military prowess, and for good reason (ever seen those movies?). The Spartans were schooled in the art of warfare starting at a young age. We're talking years of physical training, but they also learned to read, write, and learned music. They were solidly educated, and probably the most solid fighters Greece had to offer.

Spartan women were similar. They had the power to own land, exercised outdoors like the young men, and even participated in sports. They had more power than any other women of the the same era and even knew their way around weapons. After all, someone had to protect the home city when the men wandered off.

So it makes perfect sense to us that you want to dress as a woman of Sparta. No simple Greek maid will do. No, you need something stronger, intimidating, and smart. But you still love the look of the long Grecian dresses. So here we have coupled the fierce and the graceful. For you, we have a Spartan Goddess Costume. It's a full two-tone dress in red and white. It comes with an arm band and wrist cuffs in faux suede, along with a head band. In this ensemble you'll feel every bit the ancient warrior and woman of power. And really, why shouldn't you?