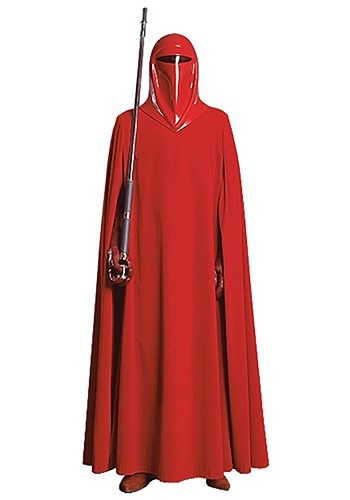 When it comes to the Star Wars universe, there are plenty of super cool, super impressive characters to choose from. You’ve got Wookiees, Jedi masters, generals, even an emperor. It can be easy to get distracted by flashy folks with larger-than-life weapons or spaceships, especially if they’re roguishly handsome and come with snappy catchphrases. But hidden in the background is a force that’s just as powerful as any rebel alliance or smuggler’s gang: the Imperial Guard.

These guys (and gals) are the definition of the “strong, silent” type. Tasked with defending the life of Emperor Palpatine against all odds, they’re chosen from millions of recruits based on their strength, loyalty, intelligence and weapons proficiency (also their height, which is sort of weird, but maybe the emperor is really concerned about creating a photogenic group of guards). They don’t wield the Force themselves, but they wield a lot of other cool weapons: force pikes, blaster pistols, and vibroblades, among other things. Even those seem a little… lackluster… when you’re defending a guy who can levitate objects with his mind and shoot lightning blasts out of his fingers, but the emperor has to have his reasons for keeping the guards around.

The most obvious feature of the Red Guard is their iconic uniform. We’ve captured that essence in this Supreme Edition Imperial Guard Costume. The burgundy robe is soft velvet, with an adjustable burgundy waist belt that has a decorative knot in the front. The costume also comes with a pair of mahogany colored faux leather gloves and a molded Imperial Guard helmet with tinted visor. Put on this uniform and get ready to guard the Emperor under any circumstances, even death!

Questions & Answers
Q: Hi. I went through the Google shopping link and it says this costume is Rubies. Is that correct? It doesn’t say it is on the web page. Ronald
Asked by Mike | 19 April 2022
Answer
Ask a Question
Reviews