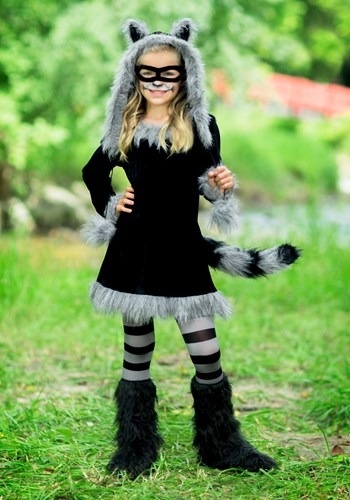 Ever wonder why raccoons like picking through garbage cans? Obviously it's because that's where all of the leftover food that was too good to eat is! Luckily, not all raccoons are as into dumpster diving, and some, like your little one in this Sweet Raccoon Costume, just want to hang out and play!

Raccoons may be cute little creatures in the wild, but even when they aren't digging through junk in search of tasty treasure, they always kind of look like they're up to no good. Maybe it's how their fur makes it look like they're wearing a bandit mask that gives them their dastardly trademark look, or perhaps it's their hand-like paws that make them seem so crafty. Whatever it is that gives them such a sneaky, mischievous vibe, you have to admit it also makes them pretty darn cute! And as long as she's not eyeballing their snacks or leftovers, we bet your little critter will get along with everyone just fine; even the kids dressed up as animals that might prefer to chase a raccoon up a tree than play with one!

She's sure to look like the sweetest raccoon of the bunch in this cuddly complete costume. The soft velvety dress is trimmed with fluffy gray faux fur, and the matching hood features adorable ears and pom poms. It also comes with an attachable plush raccoon tail and a bandit style eye mask, so you know she'll always have some scheme planned for later. But when she looks this cute, you could probably let a little mischief slide!

Size Chart
ML XL
Inches
Centimeters
Costume Sizing Tips
Questions & Answers
There are no questions for this item yet. Be the first to ask a question!
Ask a Question