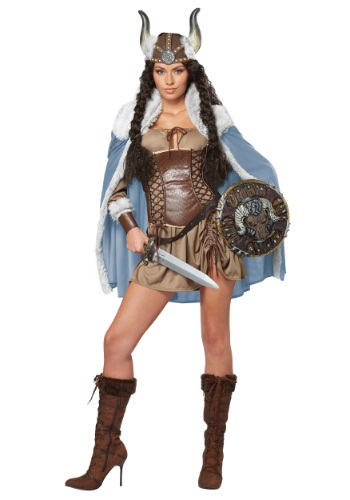 It's been said that love is a battlefield. But to some people, those words might sound a little out of order. The valkyrie who must have inspired this Women's Viking Vixen Costume, for example, would probably say a battlefield is love, or whatever was closest in Old Norse. And people like us, who enjoy mixing things up, might assert that field is a love battle—though we can't claim to know what that means!

That's okay, because there's almost as much difference of opinion about the historical Vikings as there is about love and war. Were they rabid marauders? Adventurous seafarers? Master merchants? Opera enthusiasts? Did the real Vikings even wear horns on their helmets? There aren't a lot of easy answers, even if you're an archaeologist. That's why we stick to Halloween costumes: because when we see a shieldmaiden outfit with great faux leather details and a majestic fur-lined cape in powder blue, we know exactly what to think and feel. It's awesome! And we didn't even need a PhD!

When you're wearing this strapping armor, you get to decide whether being a Viking means raiding and pillaging, knocking a few heads together, or just shattering wine glasses in a hail of high notes. As soon as you get your hands on one of these costumes, your fate becomes your own—though we'd also be happy to set you up with a couple of battle-ready accessories. Then you'll be totally free to cut loose and go berserk!