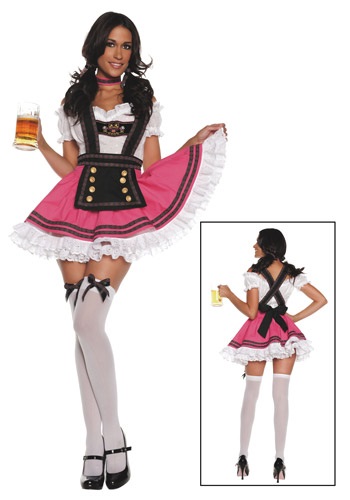 There is no such thing as bad beer. It's just that some taste better than others.

We aren't quit sure we believe that. We have tasted Hamms, and Busch beer...mostly when we were young, and couldn't afford a better beer. We would have much preferred a Sierra Nevada Pale Ale, or a Founders All Day IPA. But then again, we were happy to just have any beer.

Whether or not you are a craft beer kind of gal, you know that you'd rather have a less than good beer than no beer at all. You might like fancy Belgians, and hoppy IPAs, but in a pinch you would settle for an ice cold Budweiser on a hot day. But soon you will be going to Oktoberfest, and you know what that means. You will be drinking the best beer, not some watery brew. Now all you need is the right outfit.

You can't go to Oktoberfest wearing a sweater supporting your decolletage, and a pair of skinny jeans. No, you need this Women's Fancy Beer Girl Costume to show how refined your beer tastes are. You won't be forced to drink any second or third rate beers like Hamms, Busch, or even Budweiser. No you will be swimming in all the craft beer you can handle. When everyone see you wearing this costume they will know that you know your Belgians, and IPAs, you know your hops, and your wheats. In this costume you can tell everyone that there is no bad beer, it's just that some taste better than others. Much, much better.