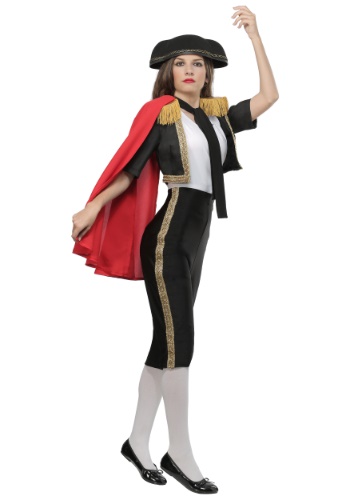 Did someone say, stampede?

There's a rumor on the streets in Spain: a stampede is coming. Not a stampede of bulls. Oh no, those horned beasts are locked away in their cages and not currently barreling down the cobblestone streets (thank goodness). It's a stampede of people and they're coming straight for you. Relax, relax, you don't have to prepare for combat of any kind because these throngs of fervent fans just want to be amazed by the mere sight of you. Basically, you could just stand in a ring, positioned exactly how you are, and people would pay money so they could catch sight of you: a fearless female bullfighter who throws caution to the wind for the sake of entertainment and tradition (and pure adrenaline too, of course!)

You'll look like the real deal once you're outfitted in the authentic-looking uniform. The magnificent matador costume for women offers you the credibility of a traditional bullfighter from Spanish culture, complete with gold epaulets and a red cape. You'll look brave and completely confident once you're outfitted in the rest of the costume: pants, top, coordinating jacket, traditional hat, black neck scarf, and a pair of long socks.

Well, we hope that you've braced yourself! Judging from the pitter-patter of their footsteps, the herd of people is only about a block away now. We know you can dodge an angry bull, but can you dodge an overzealous fan who desperately wants a selfie with you? Better get your cape ready, just in case!