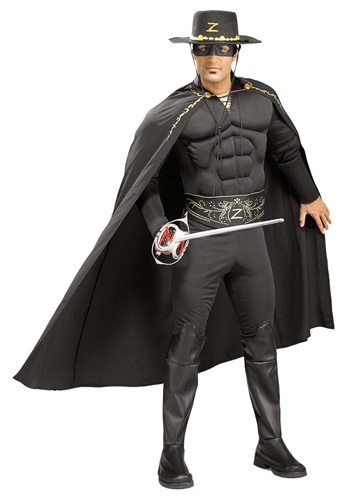 When freedom is a memory, and justice is outlawed, the just must become outlaws.

Some men fight for money. A few fight for women. Fewer still fight for honor. And one fights for justice. A man with a masked face. To protect his identity. No, we don't mean Batman. We mean a masked vigilante older than the Caped Crusader. No we don't mean Robin Hood either.

We mean Don Diego de la Vega, who puts on a mask, and becomes the man who is willing to fight for what is right, for what is just. He goes against the tyrannical law. He stands up for the common folk. He is skilled with the sword, and uses it to dispense his own brand of justice. We mean the hero of a Mexican ruled Los Angeles. We mean Zorro!

Are you a man who fights for justice? If so, this Adult Zorro Costume is the perfect thing for you. You will have everything you need to start dispensing some vigilante justice. Well, everything except the sword. If you don't have access to a master blacksmith worry not, we also have a Deluxe Zorro Sword. You don't need to be a brooding bat, or a dirty woodsman to stop bad people from denying people their freedom. This costume lets you be the suave Mexican Don, as you save the people of Los Angeles. You will have a lot of opportunity to use your sword, be it against foes, or slashing the classic Zorro "Z" as a warning for any oppressors.