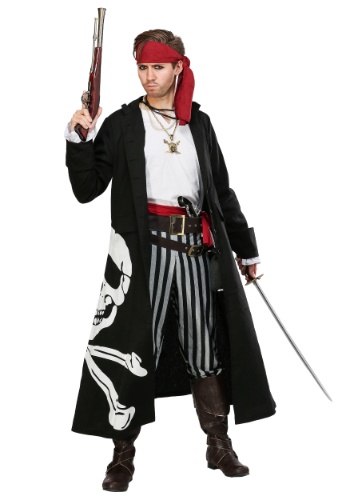 Um, did you just become a super elite pirate who mutinied his last captain to take command of the saltiest ship to be found and rule the seven seas with an iron fist and the uncanny ability to plunder enemy ships at will? Yes. Yes, you did. Because you had the foresight to pick up this Pirate Flag Captain men's costume!

You might not believe us, but yeah, that was our plan the whole time with this pirate costume! We did, in fact, design this costume right here in our own HalloweenCostumes.com studios, and while, yes, we are letting folks other than yourself order it, we're sure you're going to be the best dang pirate to be found when you wear it. Cause you're gonna have a pirate flag right on your jacket!

A really cool, innovative, and unique style if we may say so (way to go costume design team!) you've never seen a costume getup like this before. Striped pants and a white tunic shirt, along with two belts, make for a pretty traditional pirate style. But when you add the screen printed trench coat style jacket, well, that's when you become an elite captain! Arm yourself to the hilt from the armory of prop guns and swords that we have available, and you too will be ready to rule the high seas. Because, yeah, it's pretty much your destiny to become the Pirate Flag Captain!