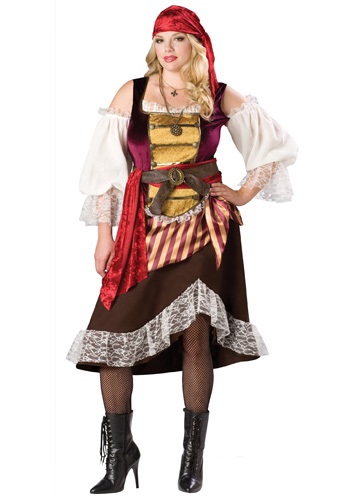 There's something a lot of people don't know about the Golden Age of Piracy (which, if you're not familiar -- but we're pretty sure you are -- is the "yo ho, yo ho," swashbuckling, Caribbean-cruising, "Arrr, matey," rum-running era). It's that women were on the high seas right along with the cabin boys and the first mates and the captains, and they had just as good a time... and pillaged just as much treasure... as anybody else. So in the spirit of these maidens of the sea, hop aboard and join up with your pirate brethren this Halloween! There's no better way to get down to some serious buccaneering on the big night than with this Plus Size Deckhand Darlin' Pirate Costume!

It's a richly detailed dress that hits on all the classic hallmarks of the era. But most importantly, it reflects the life of a woman on the high seas, where survival is a day to day struggle. So it's an ensemble of artfully ragged and clashing styles. You've got the peasant-style blouse with billowy white gauzy sleeves, and a plush velvet vest with a gold brocade inset... suggesting you were a peasant girl who, uh, "borrowed" that sweet vest from a woman of higher means. Other details include a dress with an uneven hemline (raggedy) and a velvet sash (fancy). Lest you forget what you are, the costume is topped off with a very "piratey" velvet headscarf.

It creates a perfect image of the classic pirate girl. So whether you're pillaging alone or with a full crew this Halloween (have your friends check out our wide selection of pirate costumes and accessories!), do it in the Plus Size Deckhand Darlin' Pirate Costume!