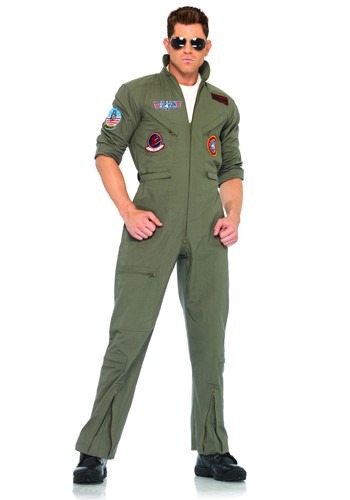 Nothing turns a girl on like aviator sunglasses. Any guy can rock the look, too. It just takes a little confidence. You can hide behind them, but there is a certain amount of machismo built right into the mirrored finish. Put on a pair and you are instantly a sexy Tom Cruise from "Top Gun". Not the movie where he was dancing in his underwear, but the fighter pilot movie he starred in based on the U.S. Navy's elite fighter team, the Blue Angels. Wow -- now there's some guys that really know how to wear a pair of aviators like they mean it.

This is all before Tom Cruise got all weird and couch jumpy, though. Oddly, his character flew an F-14 Tomcat. Is that some real life foreshadowing, or what?! Well, obviously Katie lost her loving feeling and moved on. We should, too.

Sometimes you are feeling a little bit like Goose, sometimes you wanna rock your inner Maverick. Luckily, this olive green jumpsuit lets you do both with removable Goose and Maverick name patches to choose between. Which name you pick depends on the mission, just make sure your ego doesn't write a check that your body can't cash.

And, if you feel the need for speed, check out our delivery. We think were pretty darn fast. Not Mach 2, but still fast.