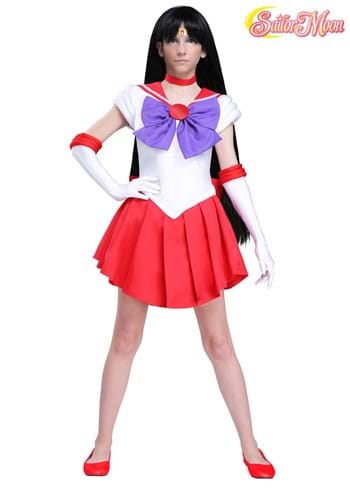 BRIGHTEN UP THE NIGHT

The Dark Kingdom has a way of throwing shade on just about everything, spoiling anything that humans would otherwise enjoy.  They've brought ruin to birthdays, hindered shopping sales — they've even found a way to make entrance exams worse!  So, when a young spit-fire shows up with a penchant for spiritual mutterings and a palpable power, it only made sense that the first two Scouts thought that it would be trouble!

Of course, Sailor Mars proved to become one of the most important members of the team.  Her ability to banish evil spirits and call down the fire to eradicate the darkness pretty much makes her the powerhouse of the Sailor Scouts.  So, when All Hallows Eve is coming around the corner and you can just feel the Dark Kingdom preparing to make everyone's night rotten, you know exactly what you can do to win back the night.  Mars Power Make-up!

Even if you're currently lacking the magical Transformation Pen, you can still become the Scout of Fire with this officially licensed Sailor Mars Costume.  Our Earthbound design team has worked their own magic to make this perfect reproduction of the Scout's outfit with some of the best craftsmanship on the planet.  The leotard is a crisp white and features the purple bow on the front and rear that you'll recognize.  The red skirt, accented gloves, and choker all match the look wondrously and the skirt even has a petticoat to keep your power flared.  The iconic tiara has a faux red gem that'll glitter in the light.  You're ready to defeat the Dark Kingdom with this look!

THE MAGIC OF MARS

You might not think of Mars as a place of spiritual might and firey light.  But, the Princess-made-Warrior is always ready to show the power of the red planet to defend the galaxy against darkness.  Save us all and have a great time, yourself, with this exclusive Sailor Mars look.